My research examines how internationally inspired development efforts shape livelihood strategies, intimate identities, and spatial organization in Peru’s urban periphery. By analyzing the home as a site that connects intimate life projects to grand-scale urban development plans, my work contributes to cross-disciplinary efforts to understand how emerging global governance technologies remake everyday life in the urban margins. I am presently completing work on my first book, Extreme Lives: The Politics of Poverty and Intimacy in Urban Peru, and pursuing new research on how e-governance and biometric identity infrastructures are transforming experiences of citizenship and the dynamics of everyday life in Lima and other regions of Peru. Taken as a whole, my research agenda  explores policy relevant issues from the ground up to understand how state plans intervene in the construction of everyday life, remaking identities and relationships in the process. This agenda is consistent with anthropology’s long-standing goals to understand the evolving nature of human similarity and difference, while its public orientation helps to illuminate the lived effects of social policies.

In the book manuscript based on my doctoral research, Extreme Lives: The Politics of Poverty and Intimacy in Urban Peru, I examine the relationship between global imaginaries of poverty, Peruvians’ domestic ideals, and unruly patterns of urban development. Between 2007 and 2011, I conducted multi-sited and comparative ethnographic research in two officially designated “extreme poverty zones” in urban Peru. Both sites emerged suddenly following declarations of social and environmental emergencies and saw intense debates as state agents, international actors, and community members sought to distinguish between the “deserving” and the “underserving” poor. In analyzing these areas, I combine literatures on the geography of poverty and the temporality of crisis to argue that “extreme poverty” in Peru is both a spatial and temporal phenomenon that is critically associated with particular life stages and “informal” or “fragile” family forms.

The central argument of my manuscript is that as “extreme poverty” is mediated by official reports and popular imagery, it is domesticated in two senses. Poverty is identified, quantified and controlled, but also increasingly understood and experienced through domestic space and intimate relations. Bolstered by trends in international development, the Peruvian state endeavors to fight poverty through the strategic deployment of legal documents that promise to secure property rights, stabilize domestic dynamics, and produce morally upright citizens. At the level of the household, however, politics and bureaucratic documents intertwine with kinship and sexual moralities to generate new insecurities and marginalize non-normative family forms, particularly female-headed households. In analyzing this unruly domestication of poverty, I explore how international audit cultures generate both knowledge and skepticism, how efforts to create governable societies feed illicit markets, how gender and family-form mediate experiences of marginality, and the knotted intersections of politics and kinship in urban development practice.  By ethnographically refusing to treat “the poor” as a distinct set, and instead showing how people move in and out of poverty in space and time, this research challenges universalizing discourses of “global poverty,” illustrates how formality and informality intertwine in everyday life, and identifies emergent patterns of social exclusion in Latin America.

Second Book Project: Biometrics, Digital Modernity and the Margins of the State 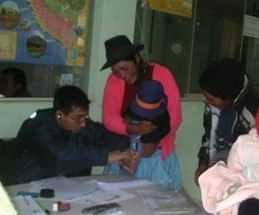 Field agents for Peru's "Right to Identity Campaign" take a print of a baby's foot to process his birth certificate and identity card.
My second project, Biometrics, Digital Modernity ,and the Margins of the State, builds on my studies of Peruvian poverty by investigating how the introduction of e-ID and e-government systems remakes patterns of everyday life and forms of political engagement in Coastal, Andean, and Amazonian regions of Peru. In June 2013, Peru’s decade-long effort to “fight poverty” by distributing ID cards took a digital turn as the government began issuing new electronic ID cards, containing biometric data and digital signature information.
These cards are part of the Peruvian government’s latest effort to “modernize” the state: to use encrypted digital signatures, video surveillance, and pocket-sized biometric scanners to create an “inclusive” state capable of efficiently processing documents, criminals, and democracy. This study examines the implementation and everyday effects of e-governance and biometric surveillance systems in different state agencies in Coastal, Andean and Amazonian regions of Peru to ask: How do new digital and biometric technologies alter the ways people are connected to, interact with, and experience the state? To what extent do they ameliorate, reinscribe or reconfigure race, class, gender and geographic inequalities? How do ethnicity and regional history inform the ways Peruvians perceive these new modes of state-society connection? And, given the longstanding role of documents in constructing civic virtue, social hierarchies and kinship in Peru, how might these new technologies intervene in the production of family and intimacies? By exploring how digital government and biometric identity infrastructures are woven into Peruvians’ political and personal relations, this research contributes to anthropological discussions of security, statecraft, infrastructure, and embodied identities, while nuancing policy debates about the potentials and perils of biometric data and digital governance.